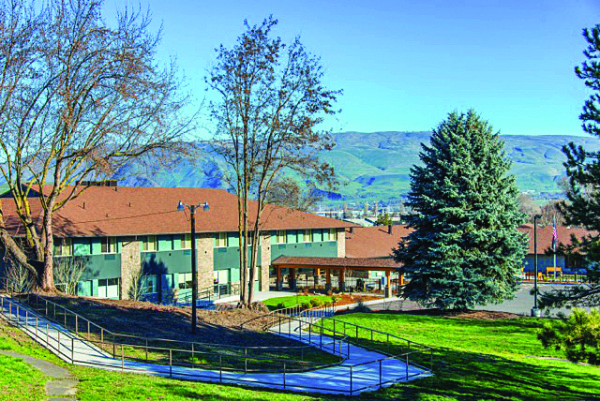 THE DALLES, OR — Geoff Gerding took a long and winding route and now he’s right where he belongs.

“I always wanted to work in long-term care,” says Gerding, the new executive director of Columbia Basin Care Facility, the only not-for-profit skilled nursing facility in The Dalles. Founded in 1964, Columbia Basin has been in service to the community for over 50 years.

“As a kid, my best friend’s parents offered adult foster care in their home, so I spent a lot of time talking with the older folks. I loved it,” says Gerding.

Born in The Dalles, Gerding spent his childhood in Forest Grove. He attended Oregon State University where he earned a degree in Public Health with an emphasis on Health Care Administration. His intended career path, however, took a brief detour for love and opportunity. He traveled abroad and upon his return he worked in the mortgage lending business, though he remained eager to return to his first and primary interest: long-term health care.

After two years as assistant director under the leadership of Ron Bell (who retired in January), Gerding was appointed executive director in February.

Gerding was thrilled at the opportunity to return to The Dalles and to serve in a position combining his compassion for senior citizens and his dedication to community-centered care.

“The residents come first. That’s absolutely the most important thing,” he says. “The care model has changed dramatically in the last 15 years. With the community-based approach at Columbia Basin, everything is centered on what’s best for the resident.”

“We’re here to serve and honor the residents,” he says. “We are called to meet every moment with compassion and empathy.”

The team of on-site, licensed physical, occupational and speech therapists provide comprehensive rehabilitation and restorative services and are equipped with top therapy technology such as the Omni VR (virtual reality), as well as electric, ultrasound and thermal therapy.

In addition, Columbia Basin now offers the area’s only on-site geriatric nurse practitioner. Valerie Hively-Blatz is an in-house provider, specializing in the care of senior citizens.

Columbia Basin Care Facility offers intensive, skilled nursing and intermediate care to those with moderate to serious health and dementia conditions. Columbia Basin is situated on nearly five acres with views of the Columbia River Gorge and Cascade Range in the sunny climate of The Dalles, just one hour east of Portland.