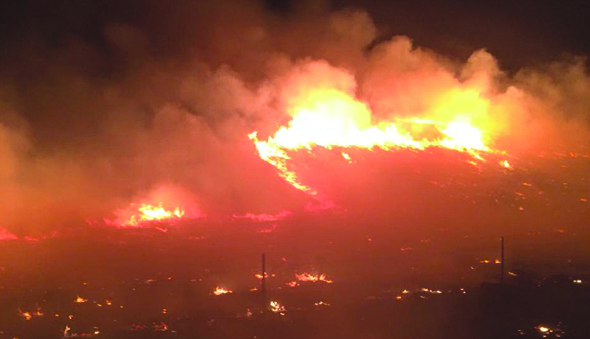 Quick action and immediate willingness to help a neighbor made a big difference in saving property and wildlife habitat from even worse destruction during Oregon’s first major brush fire of the season.

“We had pretty much all the emergency responders in Morrow and Umatilla counties out there from the time the fire was reported at 2 p.m. Monday until it was finally put out after midnight on Tuesday,” he relates.

TransCanada’s Carty Lateral pipeline currently under construction in Oregon’s High Desert was not directly in harm’s way during a recent mammoth brush fire.

“Luckily, nobody got hurt. There’s mainly a bunch of sagebrush and desert out there.”

But there is also Threemile Canyon Farms, a major producer of organic fruits and vegetables widely known for its sustainable farming practices. And the Carty Lateral right-of-way and pipe yard, as well as an existing electric generating facility. And hay bales.

“Apparently what happened is that one of the hay bales in that area spontaneously combusted,” says Jamie Walter, TransCanada’s assistant project manager for Carty Lateral. “It is dry and very, very windy near Boardman.”

Smoke and sand were kicking up

“One of our inspectors noticed the fire and called me from where he was working,” recalls John Felts, TransCanada’s construction manager for Carty Lateral. “I went out to the site with Mark Zogg (construction superintendent for contractor Michels Corp.). “The wind was blowing really hard, and with all the smoke and sand it was kicking up, you couldn’t see very well.”

Felts and Zogg determined that given the location of the fire and direction of the wind, there was little danger of the fire’s engulfing the right-of-way or overtaking the pipe yard that is the hub of Carty Lateral construction. Still, the decision was made to shut down the pipe yard at 3 p.m.

The call came in

About that time, Zogg received a call from a representative with Threemile Canyon Farms – who has provided the water TransCanada uses for dust abatement – asking if they could have access to the water trucks TransCanada is deploying to control road dust during Carty Lateral construction. The decision was easy.

“We got right on it,” recalls Felts. “Since we were already shutting down the pipe yard due to poor visibility and smoke issues, our people were already wearing particulate masks.” So our crews were ready to respond immediately to get the water trucks to the fire as quickly as possible.

And while there were plenty of other agencies in response—including the U.S. Air National Guard, which dispatched a Chinook helicopter from nearby Pendleton, Oregon, to scoop up water from a reservoir to drop on the blaze—there is no doubt TransCanada’s quick action helped save habitat and protect property.

We were concerned about safety

“We were concerned not only about our safety but also the safety of the farm and the environment,” says Felts. “We have to be concerned about the native species out here, too. That’s one of our responsibilities.”

“I am not surprised we responded as quickly and efficiently as we did,” says Phillip Bohannon, Carty Lateral project manager. “That’s why you put together good teams, so when things come up unexpectedly, you can make spur-of-the-moment decisions and take decisive action.”

To be prepared to respond in the event of an emergency like these fires, TransCanada conducts emergency exercises and drills with first responders, including more than 120 in 2014.

The Carty Lateral is a 24-mile (39-kilometre), 20-inch-diameter extension from the Gas Transmission Northwest (GTN) mainline that will provide natural gas to an electric generation facility in north-central Oregon. Portland General Electric owns the generating facility.