The Oregon Trail A New American Journey By Rinker Buck 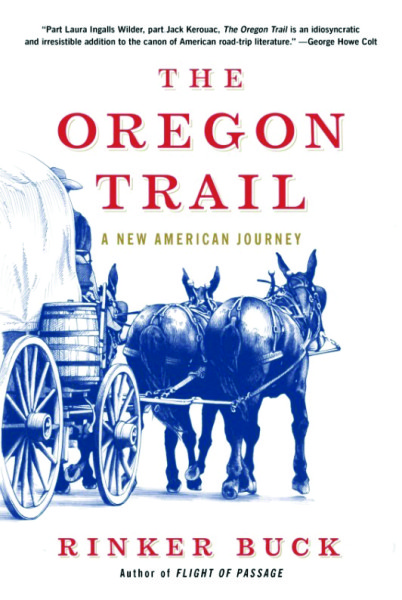 Spanning two thousand miles and traversing six states from Missouri to the Pacific coast, the Oregon Trail is the route that made America. In the 15 years before the Civil War, when 400,000 pioneers used the trail to emigrate West—scholars still regard this as the largest land migration in history—it united the coasts, doubled the size of the country, and laid the groundwork for the railroads. Today, amazingly, the trail is all but forgotten.

In 2011, writer Rinker Buck and his brother Nick set off to make an authentic covered wagon crossing of the 2,000-mile Oregon Trail. They knew that their chances of failure were high. “Even if your wheels break halfway across,” his editor told him, “There’s still a great book there.” In fact, the Buck brothers’ wheels did break, at South Pass on the continental divide in Wyoming; they flipped their provisions cart in Nebraska; and their axel snapped in two in eastern Oregon. But after making trailside repairs, the Bucks persevered, becoming the first wagon travelers in more than a century to complete a crossing of the trail. Rinker tells the story of their epic adventure in THE OREGON TRAIL: A New American Journey (S&S; hardcover; June 30, 2015), a “romantic” (Library Journal), “astonishing” (Kirkus Reviews) and “masterful” (Publishers Weekly) book that illuminates the rich history of the great pioneer road, the people who made the migration, and the colorful state of the trail today.

The idea for the trip was born at a restored Pony Express station in Kansas, where an expert on the Oregon Trail practically dared Rinker to follow the road from Missouri to Oregon by saying that nobody had done it since the pioneers in the late 1800s. Rinker was no stranger to such adventures. He and his older brother Kern flew across America in a Piper Cub at ages 15 and 17, a historic trip Rinker recounts in his 1997 memoir “Flight of Passage.”
This time, Buck teams up with his brother Nick – a horseman, carpenter and actor – three mules, and a filthy Jack Russell terrier named Olive Oyl, to travel from St. Joseph, Missouri, to Baker City, Oregon, over the course of four months. Along the way, the Buck brothers dodge thunderstorms in Nebraska, chase runaway mules across the Wyoming plains, scout more than 500 miles of nearly vanished trail on foot, cross the Rockies, and make desperate 50-mile forced marches for water. They travel alongside fleets of RVs heading west; meet ranchers and Mormon re-enactors; see ethanol plants, massive wind farms, and huge data centers for Google and Microsoft; and observe the teen dating culture at western rodeo corrals.

But THE OREGON TRAIL is much more than a travelogue. It is also a lively and essential work of history that shatters the comforting myths about the trail years passed down by generations of Americans. Buck introduces readers to the largely forgotten roles played by trailblazing evangelists, friendly Indian tribes, female pioneers, bumbling US Army cavalrymen, and the scam artists who flocked to the frontier to fleece the overland emigrants. We also learn how the trail accelerated American economic development and the stories of the pioneers themselves—ordinary families whose extraordinary courage and sacrifice made this country what it is today.

At once a majestic American journey, a significant work of history, and a personal saga reminiscent of bestsellers by Bill Bryson and Cheryl Strayed, THE OREGON TRAIL is an ambitious work of participatory history with a heart as big as the country it crosses.

Rinker Buck began his career in journalism at the Berkshire Eagle and was a longtime staff writer for the Hartford Courant. He has written for Vanity Fair, New York, Life, and many other publications, and his stories have won the Eugene S. Pulliam National Journalism Writing Award and the Society of Professional Journalists Sigma Delta Chi Award. He is the author of The Oregon Trail as well as the acclaimed memoirs Flight of Passage and First Job. He lives in northwest Connecticut.