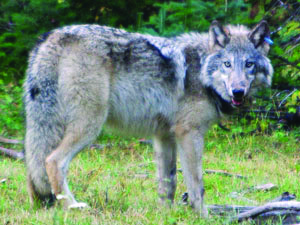 The Oregon Department of Agriculture has approved $81,300 in funding distributed to nine counties east of the Cascade Mountains as part of the Oregon Wolf Depredation Compensation and Financial Assistance County Block Grant Program. Funds for 2015 have been distributed for actual livestock losses or injuries caused by wolves, for missing livestock above the normal historical levels in areas of known wolf activity, for proactive efforts to prevent wolf and livestock interactions, and for county wolf program implementation.

According to the Oregon Department of Fish and Wildlife, Oregon’s wolf population increased in both distribution and abundance in 2014. By December, Oregon’s minimum wolf population was 77 wolves. Nine packs were documented and known wolf packs occurred in parts of Baker, Jackson, Klamath, Umatilla, Union, and Wallowa counties. In addition, six new pairs of wolves were confirmed in Oregon; five within the Eastern Wolf Management Zone and one within the Western Wolf Management Zone.

Wallowa, Umatilla and Baker– three counties experiencing the bulk of the state’s wolf activity– have received $68,170, or approximately 84 percent of the money awarded for 2015.

The state has paid 100 percent of the claims submitted to ODA tied to confirmed or probable livestock losses due to wolves. Livestock owners worked with the Oregon Department of Fish and Wildlife (ODFW) to Department of Fish and Wildlife (ODFW) to document these losses. Payments are made on a reimbursement basis for depredations that occurred during the previous grant cycle. Wallowa, Umatilla, and Baker were the only counties filing claims with ODA that experienced confirmed or probable livestock losses in the 2014 cycle. These three counties were awarded $7,200 in 2015 to compensate affected ranchers for those losses. Wallowa County received $3,930, Umatilla County received $1,800 while Baker County received $1,470 for compensation.

Of the total funding provided by the block grants this year, $51,230– or 63 percent– is going towards proactive, non-lethal efforts to reduce conflicts between wolves and livestock. County level advisory committees established by the grant program’s legislation requested funds to undertake proactive conflict deterrence efforts. Historically, these deterrent techniques include one or more of the following activities:

· Hazing or harassment of wolves– loud noises, spotlights, or other confrontation with wolves

For 2015, ODA was again able to use funds from a 2013 and 2014 wolf-livestock demonstration grants awarded by US Fish and Wildlife Service. For 2015, $3,600 of these federal funds were used for depredation losses and $25,615 were used for non-lethal preventative awards.

A total of $3,645 was awarded to six counties to help with county implementation costs.

The following is a list of the total awards made by ODA to counties as part of the Oregon Wolf Depredation Compensation and Financial Assistance County Block Grant Program for the 2015 Grant Period:

The fund process remains available for counties to address depredations that occur in the future. In that event, livestock operators should submit claims to their local county wolf advisory committee.