Wyden, Crapo, Nine Other Senators Pledge to Work Together to Find a Wildfire Funding Solution in the Fall 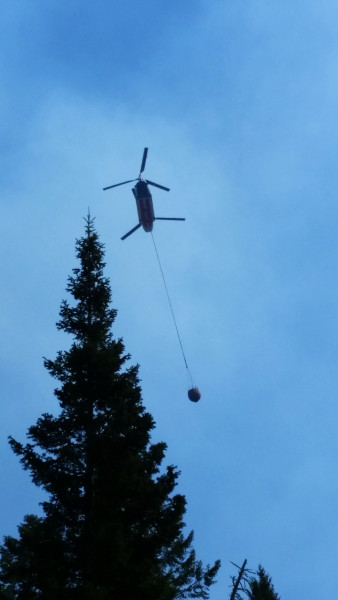 Washington, D.C. Thursday, August 6, 2015 – Sens. Ron Wyden, D-Ore., and Mike Crapo, R-Idaho, today secured a commitment from nine other senators from both parties to work together on a bipartisan solution to fix the broken system for funding wildfires when the Senate resumes regular business in September.

Wyden and Crapo reintroduced the Wildfire Disaster Funding Act in January to end the cycle of underfunding fire suppression, which currently forces federal agencies to steal from fire prevention funding just to fight fires. Instead, Wyden and Crapo’s bill will end this so-called “fire borrowing” by funding the largest wildfires from a similar disaster account used to fund other natural disasters like hurricanes and tornadoes. The Interior Department and the Forest Service estimate these fires – about 1 percent – consume 30 percent of firefighting budgets.

A report from the U.S. Forest Service released Wednesday showed that the agency’s budget for fire suppression has more than tripled over the past two decades. The current system has underfunded fire suppression seven out of the last 10 years, forcing the agencies to take funds from other accounts to fight fires.

In March, Wyden and Crapo successfully attached language to the Senate budget that sets the stage for passing their funding solution. The language in the Senate budget adjusts a funding cap that has prevented agencies from treating wildfires as natural disasters under the federal budget.

“Oregon is on fire and the Forest Service tells me that with current fire seasons getting longer and current budgetary constraints the days of spending over 50 percent of their budget on suppressing fires is here to stay,” Wyden said. “The time for talking is coming to an end and the time to negotiate a fix to this very serious problem is at hand. We are going to work together this summer, with the fires in the West literally fueling our motivation to take meaningful steps this fall to end fire borrowing and to ensure that the federal agencies have the resources they need to prevent these infernos from igniting in the first place.”

“We know that wildfires are going to continue to be a threat, and we can better prepare for the increasing costs of wildland fire management by making needed changes that will support the preparation of firefighters and land managers,” Crapo said in a statement for the record. “That is why I partnered with Senator Ron Wyden in introducing legislation, the Wildfire Disaster Funding Act, to provide for more efficient and effective fire management. I look forward to working with my colleagues across the West, and in the Senate Budget Committee in particular, on legislation that would better budget for our nation’s fire suppression activities.

The Wildfire Disaster Funding Act would move any fire suppression spending above 70 percent of the 10-year average to a disaster funding account that is separate from Forest Service and Interior budgets. The bill now has 16 bipartisan cosponsors and the support of more than 250 organizations.