By: gorgeb
In: Community
Tagged: Slider 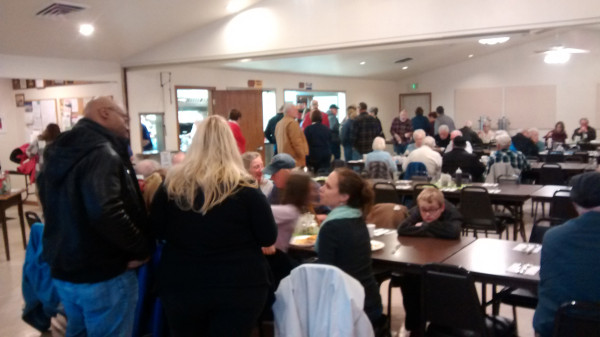 When the ‘War Department’ and I decided to move-out of the big city and to the Gorge, we knew our period of adjustment to the new environs would take some time and involve an array of activities not previously explored or participated in as “City Mice.” To my surprise, the Mid-Columbia Motoring Lunch-Hounds (the local classic and antique car club) not only introduced us new-comers to previously unknown crowd of like car-enthusiasts but also to a variety of new restaurant opportunities for socially awkward or restaurant eatery challenged.

One of the regular events that the club makes a monthly practice of attending is the first Saturday-morning-of-the-month, breakfast outing to Lyle, Washington to satiate their driving and grazing urge at the local Lion’s Club Omelet-Pancake feed. New York or Chicago has its Pizza, Philly its cheesesteaks, Hershey its chocolate, but when it comes to Saturday morning’s three-eggs, diced ham and a handful of veggies, Lyle has to be the omelet capital, or Olympus, of the world….certainly the Gorge.

Now this monthly cornucopia of cholesterol didn’t happen by chance. No, the dedicated, dozen-and-a-half members of the Lyle Lions Club have been splurping pancake batter onto a griddle, cracking eggs and pouring coffee for this monthly breakfast fete since 1982. And it goes without saying that the vittles are scrumptious. But, this egg-and-cake ruckus is all in the name of raising money for Club charities as well as local aid efforts.

How can a pancake breakfast make any sort of monetary difference in the world, I hear you ask? Well, the Community clubhouse, which was also financed and built on a few donations and, yes, pancake and omelet revenues, seats as many as 200 “patrons” at any one time. Regularly, the Club’s Saturday morning effort is rewarded with 135 Omelet Aficionados paying a “whopping” $7.00 for a meal complete with berry compote, juice and coffee. Best of all, the ravished patrons come from all over the greater Gorge area for the delicious pastime. Certainly, there are those from Lyle, Murdock, The Dalles, Bingen, White Salmon, Underwood, Hood River and points farther away and more remote.

I guess the aspect I like best about the Lyle Lion’s Club community effort (besides the grub) is that every month there are essentially the same, dedicated members working away making patrons “oh-so-happy” about showing up for their meal. Tom’s washing dishes: Rose is tending “to order’ omelets; Joan’s bussing dishes while Sue backing her up and refilling coffee; Dean’s cracking eggs and many others are helping out. Do we ever wonder about where the money is going. No, along two walls of the 50 by 75 foot dining room are rows of plaques from Lion’s Headquarters representing and thanking the Lyle team for the thousands of dollars they’ve earned and given away. And before I could close my tablet and cap my pen, Joan made sure that I knew that the Lyle Lions were preparing eighty food baskets for needy families this season.

Who says Christmas comes but once a year.