Oregon Maverick – Lars Larson on the Air Across the PNW 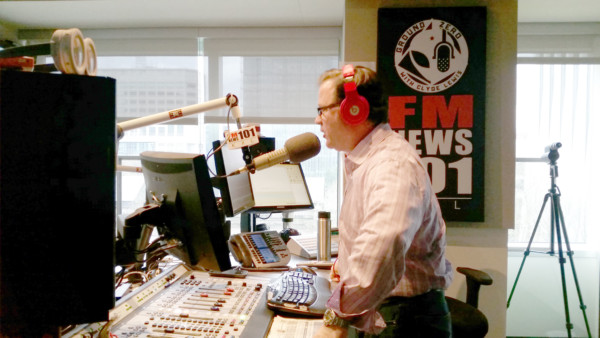 Lars Larson is well known around the Pacific Northwest; some people hang on his every word, others are known to disagree with him adamantly, this is what makes his local talk show the most listened to radio talk show in the northwest. He does not hide from controversy and seems to thrive on those who disagree with him.

“You have to have the courage to go toward a purpose, not just walk around being a jackass,” said Larson. “Once you decide you have a particular set of values it is easy to have a strong opinion.”

At just 16 years old, Lars Larson found his calling at the Mighty 1590 KTIL radio station in Tillamook; radio has been a part of almost his entire adult life. He currently works at FM News 101 KXL from 12 p.m. to 4 p.m. through Alpha Media’s Radio Northwest Network. His local show airs on 19 stations in the Pacific Northwest. He has also hosted the National Lars Larson Show since 2003, which is syndicated by Compass Media Networks to more than 100 stations.

His tag line is ‘honestly provocative talk radio’. He doesn’t hold back, is not known for his shyness, and always allows ‘nay sayers’ to go to the front of the line. He touches on subjects others would rather avoid in a day-to-day conversation, such as racism, government corruptness and cover-ups as well as the subject of transgender restrooms. No topic is off limits. For a sample of a typical day be sure to visit his website at Larslarson.com where podcasts of previous shows can be listened to.

One of the hot topics that he likes to touch on during his talk show is the divide between urban Oregon, and rural Oregon.

“The numbers are in favor of the urban areas and the urban areas have no reason to attempt to understand what is going on in rural Oregon,” said Larson. “You could understand it, but I don’t think there is any incentive for people in the cities who are in positions of government to give a damn about what goes on in the rural areas of the state. They don’t see it as their constituency, and so they think they don’t have to care about it, so the result is, since they outnumber the rural side of the state, the rural side does not get represented.”

“There is a solution, and I can apply this to the forest at the very least, and I have proposed this for a long time. It is to have a timber dividend, to do kind of what Alaska has done, and that is when there is oil taken out of the ground in Alaska, some of the money flows into what I think is called the Alaska Permanent Fund, and that permanent fund pays a divided to every Alaska resident. At times it’s been as high as $1000 per person so a family of 4 gets a check once a year for $4000 from the permanent fund. Oregon could have same kind of dividend idea, so that every year, every person in Oregon, that was considered a permanent resident, would get a check. Now let’s say one year the check is $500 and the next year the check is $300 and you say ‘how come my permanent divided went down because I was used to getting it’ and they say ‘it’s because the politicians in Salem decided to reduce the timber that was cut’. That would have an effect on the point of view of somebody living in a city as much as it does to somebody living in the rural areas, they would say ‘hold on, why did they decided to cut back on the number of trees’ and they would say, ‘oh, because the tree huggers don’t believe in cutting trees’. I think the reaction would be ‘well hold on a second, are there plenty of trees? Could we cut at this rate forever?’ ‘Yes!’ ‘Why don’t we cut more trees so my dividend check can go back to $500 next year or to $1000’. So you can imagine some urban legislature that goes to a town hall meeting and half the people stand up and say ‘hey, how come our dividend checks are down?’ And the urbanite is used to only thinking of the problems of cities says, ‘Well I voted against the timber harvest plan because I think cutting trees is wrong, trees are beautiful.’ To which some people, sensible people, would say, ‘trees are beautiful, but you can cut them down and grow more and we get a better check’. It causes the constituency to care about it. Believe me if you go to Alaska and say let’s cut oil drilling in half in Alaska, the first thing people in Alaska are going to do is ask what is that going to do to my permanent dividend check, ‘Well it’s probably going to cut it in half, ‘Well forget that, we aren’t doing it.”

“I tend to disagree with an awful lot of the conventional wisdom of the state which makes me sad. I think the state has so much potential, but I think the potential is being wasted. Because there are politicians who have their own idea of how things would work best here, and it’s unfortunate, but an awful lot of what they’ve been doing, that they think works best, demonstratively works terribly, so we have a state that has an abundance of timber we don’t cut, we have an abundance of minerals we don’t dig out of the ground, we have an abundance of farming activity that we could be doing that we are not, and there is really nothing that stops any of those things from happening except politics. There is a guy named Mike McClain from central Oregon who points out that there’s an allocation of water from the Columbia River that Oregon could be taking, but the state, for some reason, chooses not to take, and he’s tried to get the legislature to sign off on increasing the allocation. He says we could open up 30,000 acres to agriculture and be growing more food, and for some reason the powers that be in Salem have decided they don’t want to do that. To me there is no sensible reason for not doing it, because if you say why shouldn’t we grow more food, more crops, and afford more employment for more people, the only reason would be that there are some people that eat a meal three times a day, but they don’t believe in agriculture, they don’t believe in growing food, they think the land would be better off if humans didn’t touch it. And I think that same logic applies to the ocean would be better off if we didn’t fish it, the forests would be better off if we didn’t cut it, and the land would be better off if we didn’t farm it, leaving Oregon to be one giant national park.”

At the young age of 10, Larson lost his mother, who was killed by a drunk driver. “I certainly love my mom,” said Larson. “She’s been gone now for 47 years. I think I feel responsible to live up to what I think would have been her expectations of me. I do literally think about that from time to time. I think about is what I am doing now, would that have made my mother proud.”

In 1983 Larson made a break from radio and went to work at KVAL television station in Eugene where right from the beginning he covered the Diane Down’s murder trial. After his stint at KVAL he began working at KPTV 12 in Portland as a reporter, and an anchor. He also produced documentaries and the NW Report. During his television career Larson worked at five different stations.

Radio was in his blood however and he couldn’t seem to stay away from it, so he began working at KXL radio, having a talk show during the day and then anchoring on the evening news on television at night.

Finally Larson knew he had to make a decision. He also knew that radio was so much a part of who he was, so it was an easy decision to make; he left television and began working on the radio full-time. Over the years he has work at a dozen radio stations.

In his personal life he has been married to his wife Tina for 19 years and they have just welcomed their first granddaughter into the world.

Larson has accumulated 70 awards from the Associated Press, Society of Professional Journalists and the National Press Club. He has also received two Emmy’s and one Peabody.

He is currently a weekly guest on Fox News and has appeared on The O’Reilly Factor, Larry King Live, Scarborough County, Fox and Friends, BBC Radio and has been a guest on countless local radio shows around the United States.