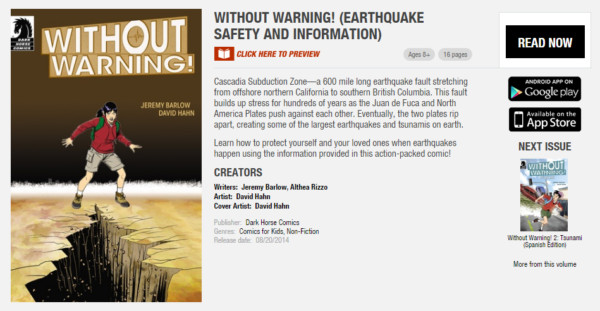 Without Warning: Tsunami is the second time that the partners have come together to collaborate on bringing preparedness messaging to youth. In 2013, OEM’s Geologic Hazards Program Coordinator Althea Rizzo approached Dark Horse with a proposal. An avid comic book fan herself, Rizzo knew that it was a good way to reach a new target audience. In August 2014, Without Warning was released, telling a story of an Oregon teen who reunites with her family after a major Cascadia Earthquake.

“The events in Tohoku, Japan in 2011 brought new awareness to the reality of what could happen in Oregon in the aftermath of a Cascadia quake,” said Rizzo. “The first Without Warning comic helped to educate young people about what to do in the aftermath of a high-magnitude earthquake. This second comic about tsunamis is a logical follow up and story continuation.”

Rizzo came up with both stories. Dark Horse Editor Shantel LaRocque then worked with writer Jeremy Barlow and artist David Hahn to have them scripted and illustrated.

Oregon is located in the Cascadia Subduction Zone, a 600-hundred mile earthquake fault stretching from offshore Northern California to Southern British Columbia. According to scientists and other experts, a large 9.0 or higher earthquake could strike Oregon at any time.

“Dark Horse is proud to support emergency preparedness and Oregon Emergency Management with the Without Warning: Tsunami comic,” said Mike Richardson, Dark Horse Comics president. “We enjoy partnering with an organization dedicated to making Oregon’s residents safe and prepared for a natural disaster, and are proud to contribute our talent and resources to the cause.”

Without Warning: Tsunami was released on October 12 and available online at http://bit.ly/2dWuS0G. Printed copies can be obtained through local county emergency management offices.