By: gorgeb
In: Forests, Washington 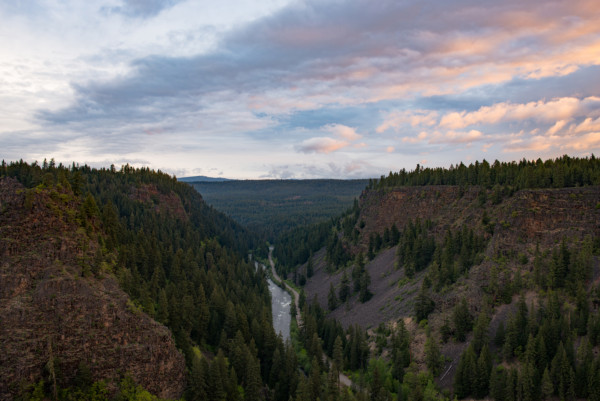 More than 2,400 acres of scenic forestland north of Glenwood in Klickitat County will become a community-managed forest under a resolution approved today by the state Board of Natural Resources.

The board authorized the Washington State Department of Natural Resources (DNR) to complete the purchase of the tract from Hancock Timber Resource Group, which has sought for several years to sell the land. The area will now be known as the Klickitat Canyon Community Forest. The acquisition safeguards a unique diversity of wildlife and protects three miles of the state’s longest undammed river.

Nearly all of the $4 million needed to purchase the tract will be paid through a grant from the federal Forest Legacy program, which works with states to keep working forestlands intact. The Columbia Land Trust will contribute $96,000 to the purchase.

An advisory committee made up of representatives from the community and local governments will develop a management plan for the forest. Working under an agreement with DNR, the Columbia Land Trust will coordinate the development and implementation of a community-approved management plan that is compatible with DNR’s goals to support fish and wildlife habitat and provide public access to recreation. Revenues earned from the forest will reimburse management costs and accomplish objectives set out in the management plan.

“We have partnered with Columbia Land Trust over the past decade and have great respect for the organization, its people, and its work,” said Brent Keefer, president of the Hancock Timber Resource Group. “We are very pleased to complete this transaction with the Land Trust and see this land in Klickitat Canyon conserved in perpetuity.”

Adjacent to DNR’s existing 2,335-acre Klickitat Canyon Natural Resources Conservation Area, this newly acquired property will be managed as a community forest, meaning that the property will be managed according to a plan developed in consultation with a local advisory committee. The community forest designation allows multiple uses, including managing the land for forestry to the benefit of contractors, mills, and communities throughout the Klickitat region.

“This is one of the most awe-inspiring landscapes in the Northwest—where the Cascades transition to oak-and-pine woodlands with Mount Adams punctuating the horizon,” said Columbia Land Trust Executive Director Glenn Lamb. “We’re thrilled to conserve this canyon both as a wildlife haven and as a community resource.”

Designated a National Wild and Scenic River, the Klickitat flows roughly 95 miles from the Goat Rocks Wilderness Area through the Yakama Nation Indian Reservation, then through a mosaic of private forests and ranchlands before its confluence with the Columbia River.

The watershed supports a stunning variety of wildlife, including 15 federal and 21 state-listed species and species of concern. Endangered salmon and steelhead continue primordial migrations while mule deer, bear, mountain goats, golden eagles, and numerous rare plants inhabit the rugged terrain. The conserved project area will help maintain habitat connectivity along the East Cascades migration corridor and support species resiliency in the face of a changing climate.
&nbps
Columbia Land Trust initially identified the project area as a prime conservation priority in 2012 and partnered with The Conservation Fund to secure funding for the acquisition.

“The national loss and parcelization of our working forests is a threat to our environment, communities, and economy. Thanks to this partnership, the future is bright for the Klickitat Canyon and everyone it benefits—from kayakers to loggers,” said Evan Smith, Senior Vice President at The Conservation Fund. “We appreciate the leadership of U. S. Senators Patty Murray and Maria Cantwell, and U.S. Representative Jaime Herrera Beutler for this conservation project.”

The Land Trust devised its conservation approach through collaboration and dialogue with local, state, and tribal stakeholders.

“[The Klickitat River] provides an essential artery that supports our culture and way of life,” said Phil Rigdon, Superintendent of Yakama Nation Natural Resources. “We support and depend on partners and owners like Columbia Land Trust that strive for good stewardship and understand the importance of enhancing and protecting these significant aquatic and ecological places. Because a watershed like the Klickitat is the last of its kind.”

“We are fortunate to live in a state with abundant natural resources and unique outdoor spaces, and I’m thrilled to see this conservation project come together,” Senator Murray said. “It is a testament to the value of the Forest Legacy Program, which works to support working timberlands and jobs in rural communities while supporting healthy habitats for fish and wildlife, as well as recreational opportunities.”

The Klickitat Canyon conservation area builds on Columbia Land Trust’s commitment to the broader Klickitat River watershed. The Land Trust conserved 3,300 acres across 11 properties in the watershed prior to this project.