Adventure Park Coming to the Gorge 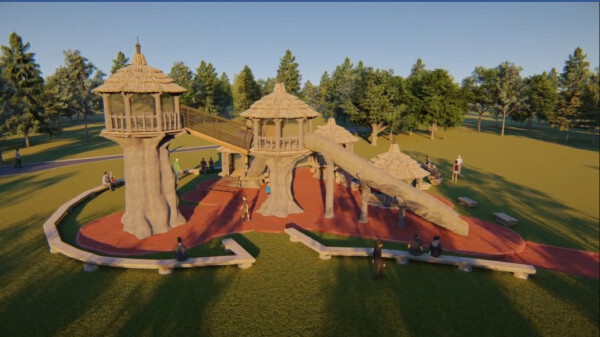 In May the North Bonneville City Council decided in favor of allocating $250,000 to the Bonneville Trails Foundation (BTF) for the development of the Bonneville Trails Adventure Park, which will include five treehouse climbers, a water feature, mountain climbers and a zipline. The project includes the renovation of the existing bathroom and basketball court as well and will cost $1.1 million by the time it is complete.

The initial $250,000 the city allocated will come from the city’s hotel/motel “tourist facility” fund.

“As this project is intended for the betterment of North Bonneville and its citizens, no public taxing, levies or bonds are being sought,” said Bonneville Trails Foundation Executive Director Jacob Meyer. “Grant opportunities will be pursued where possible, but the projects main financial support is largely envisioned to come from grassroots donation efforts.”

A donation display at North Bonneville City Hall and a “buy a Bigfoot print” are just two of the initial fundraising campaigns that will kick off soon.

“Our core fundraising strategy is creating ways for potential supporters to become directly integrated into the project,” said Meyer. “To that end, many ideas have come about, with initial focus centered on the footprint donation effort where donators will have the opportunity to purchase and personalize a limited number of specialized Bigfoot footprints to form the main entrance path into the park. These prints will become of one of the main features integrated into the permanent design of the project.”

The money from the city’s ‘tourist facility’ fund combined with existing funds from the Bonneville Trails Foundation would be enough to fully complete the first phase of the project.

“The plans include ADA compliance and inclusivity for all abilities. This idea builds on the trails and geocache and the idea of play and discover,” said Greg Hartnell, executive vice-director of education and outreach for the BTF. “We will include safety lighting and security cameras.”

This will be a “free-of-charge facility” and will be designed for ease of mowing as well as maintenance-friendly.

“While this project will be an incredible addition to our community, it is actually a major piece making up a larger vision in creating a first of its kind family recreation hub within North Bonneville’s City Center. This vision would create a long-sought family-based attraction for increased visitation into the city’s business district while also preserving the qualities that make this community so special,” said Meyer.

In 2005 a forward-thinking visioning project, known as “Outlook 2005” identified the need for discussion and planning of long-term strategies that would ensure that the inevitable growth of the city would be sustainable in both aesthetic and practical ways. The visioning project led to the creation of the Heritage Interpretive trails system, the forerunner to the Bigfoot Discovery Trails.

“We are all invested in our community, regardless of different backgrounds and viewpoints,” said Meyer. “North Bonneville is a very special place and it is beautiful. In 2005, there were surveys going out, roundtable discussions, because we all had an idea for a better North Bonneville and continuing to keep it a special place. This is where the trails, geocache, and bigfoots started. The one strong element that was talked about then and still talked about today was to reimagine our out of date playground.”

According to BTF the Bonneville Adventure Park strikes a balance between creating a tourist draw and protecting the town’s charm and beauty.
“We were trying to come up with what would be a marketable idea for tourism, support and grow local businesses, and be something for the citizens of North Bonneville to enjoy for years to come. The vision needed to be all-inclusive for all types and interests and be beneficial for all. The joining of visions of the city and the foundation was key. The vision is finally coming to life.”

With current funds already available it is estimated that groundbreaking could begin as soon as this summer according to BTF.

“It’s pretty phenomenal,” said Harnell. “Imagine being a little kid walking into this! We want to create a generational legacy.”

An amazing video of the imagined Bonneville Adventure Park is available on the BTF Facebook page. More information about the Discovery Trails and the BTF can be found at www.bonnevilletrails.com

“Long term, the idea will be for donation efforts to expand far beyond this initial reach, with sponsorship and grant opportunities amongst other potential funding sources,” said Meyer. “However, we are most excited in the idea of long-term involvement coming directly from various grassroots efforts by many of the amazing people in this community.”