Farmers Are Stepping Up to End Hunger 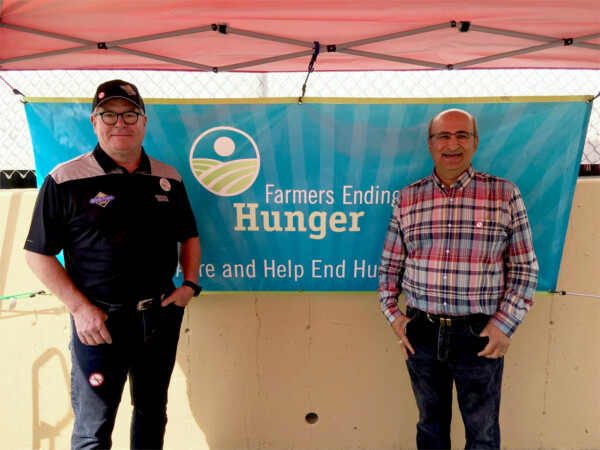 Thankfully there are people in Oregon making a difference. John Burt, Executive Director of Farmers Ending Hunger is one of those people. “Farmers Ending Hunger has given me the opportunity to do what I was intended to do with my life and helping to feed hungry Oregonians,” said Burt. “My work at the Oregon State University extension service for the past 33 years prepared me for this important role with Farmers Ending Hunger.”

“Farmers Ending Hunger started in 2006 with a donation of 173,000 pounds of peas and we now generate 3.5-4 million pounds annually of fresh vegetables, potatoes, onions, wheat, cherries and hazelnuts. We’re still doing our part to bring fresh, locally grown food to the Oregon Food Bank, but hunger statistics in Oregon and across the US have improved. Rural areas are still seeing a huge need, and childhood hunger is still a very big issue,” said Burt.

This year the Pendleton Round-Up is once again partnering with Farmers Ending Hunger, which works with local farmers to produce food for those who need it most. The Pendleton Round-Up has adopted twenty acres of farmland in their fight against hunger. The money raised by adopting acres is used for transportation, food processing and packaging costs. What’s more, the Pendleton Round-Up, with the assistance of NW Farm Credit Services and River Point Farms, will match up to $5,000 donated by attendees and fans at this year’s Round-Up. There will also be a dedicated social media campaign to support this initiative; follow the Pendleton Round-Up on Facebook for more.

“The issue of hunger is one that hits close to home for the Pendleton Round-Up and members of our community,” said Bill Levy, president, Pendleton Round-Up. “Farmers Ending Hunger is fighting back against this growing issue in our state, and we are proud to support and invest in this great cause to better the City of Pendleton, surrounding region and great state of Oregon.”

Since about 65-70% of our fresh crop donations come from Eastern Oregon farmers and ranchers, being part of the Pendleton Round-Up is very important. The Round-Up works to promote the importance of agriculture in the region and we have the opportunity to thank our donors and grow awareness of our statewide program.

Farmers Ending Hunger Day at the 2019 Pendleton Round-Up will feature interactive exhibits, experts onsite to discuss solutions to the food crisis in Oregon and opportunities for rodeo attendees to help contribute to fighting hunger through donations and action.

“As long as there is hunger and the Oregon Food Bank needs our donations, we will work to meet our goals and help as much as we can. Currently, we only operate in Oregon, but we have recently made some connections that could lead to expansion into Washington,” said Burt.

Tickets for the Wednesday, September 11 rodeo performance start at $15; packages are still available for families. To order tickets for the 2019 Pendleton Round-Up visit http://www.pendletonroundup.com/or call (541) 276- 2553.

To learn more about Farmers Ending Hunger, or to donate, visit www.farmersendinghunger.com.