I Still Believe in Theaters March 13 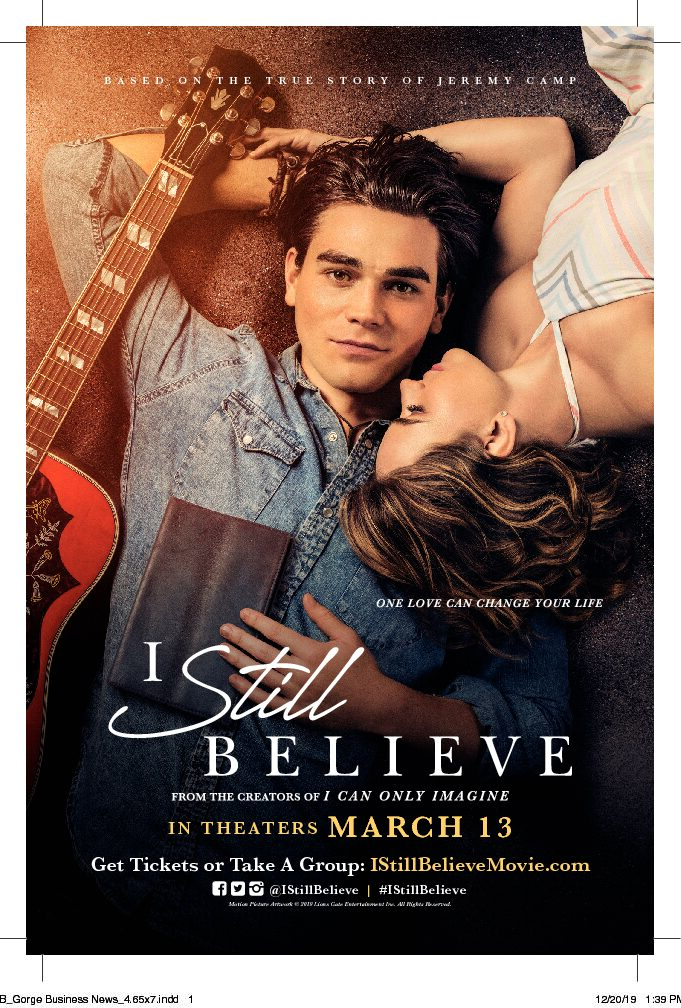 One love can change your life. One life can change the world. From the creators of I Can Only Imagine comes an inspiring love story for the ages: I STILL BELIEVE, based on the real-life story of chart-topping singer Jeremy Camp. The new movie from directors Jon and Andrew Erwin and producer Kevin Downes stars KJ Apa, Britt Robertson, Shania Twain, and Gary Sinise. A hopeful reminder that faith tested is faith worth sharing. We hope that you are inspired and encouraged by this film — hitting theaters across North America on March 13, 2020!

After the surprise $83.4 million domestic box office success of its faith-based pic I Can Only Imagine last spring, Lionsgate is returning to business with that pic’s filmmaking team Jon Erwin, Andrew Erwin and producing partner Kevin Downes for the faith-based project I Still Believe. Like I Can Only Imagine, the A+ CinemaScore pic that focused on the faith-based music group MercyMe, I Still Believe will center on another Christian music mega-star: the true life spiritual journey of Jeremy Camp.

Camp has sold over 5 million albums and has toured the world, sharing his music in more than 36 countries. His kudos include four RIAA-certified Gold albums, two American Music Awards nominations, multiple ASCAP awards, 38 No. 1 songs, a Gold digital single (“There Will Be A Day”), a multi-Platinum DVD, and he was Billboard’s No. 2 artist of the decade in 2010.
The pic reps the Erwin Brothers’ first project coming out of their Lionsgate film and TV first-look deal, in total their second collaboration with the mini-major. Cameras roll this spring for a March 20, 2020 wide release. The Erwins will direct from a script by Jon Erwin and Jon Gunn. Downes and Erwins are producing I Still Believe under their Kingdom banner.