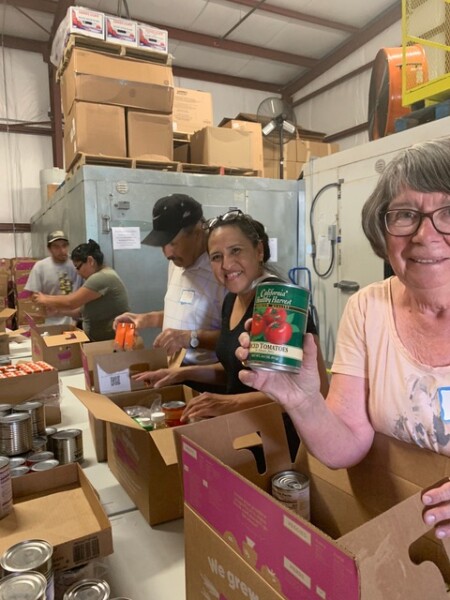 Donations from One Community Health staff and friends make for the most abundant year of giving on record.

Giving has been good this year with One Community Health’s annual Cherry Harvest Migrant Farmworker Food Drive. In fact, very good. The annual fundraiser had a record year with $3,400 in donations. The contributions were gifted by OCH staff and “friends,” or various community supporters who joined in giving to contribute their dollars as well.

As soon as the fundraiser was over, the money was delivered to the Columbia Gorge Food Bank. The food bank in turn purchased 12,240 pounds of food that is being distributed to migrant farmworkers and their families as they arrive in the Columbia River Gorge to pick cherries for a number of orchards. Often, these workers arrive to the region without enough money to support themselves and their families until that first paycheck arrives. The food drive strives to address the need.

One Community Health’s Bob Gobbo, MD was one of about 20 people who volunteered to help pack food into boxes for distribution. He was impressed by the Columbia Gorge Food Bank’s efforts as they arranged an assembly line so all the volunteers could pitch in and get all the food in the appropriate boxes and then organized for distribution. Together, everyone packed about 225 boxes in one evening; the goal is 360 boxes so another packing event will take place soon.

“It was fun!” Gobbo says. “The food bank arranged the production line, which contained packaged, canned and other non-perishable foods that were requested this year by the families as they are more desirable and useable for them.”

Not only was the fundraiser a record success and the food purchased more in line with true need, but the distribution process, organized by the food bank, has changed this year to be more effective as well. Food will be distributed at several events for the farmworker community over the next two weeks.

Next up for One Community Health, the nonprofit organization will be rolling out its migrant farmworker outreach program, connecting with farmworkers and their families in the orchards to provide critical health education and health screenings, according to Michele Guerrero, RD, OCH’s enabling services manager. The health center will also have special walk-in hours for the workers. Without affecting its high level of service for established patients, One Community Health will provide the migrant farmworker community access to care during their time in the Gorge.

“For over 30 years, One Community Health has made this outreach commitment to migrant farmworkers and their families,” Guerrero says. “These services make a difference in the health of the community and empower the workers not just while they’re here in the Gorge but throughout their lives. It’s meaningful, effective work. From the food we are able to donate to the medical, dental and behavioral health care we offer, it’s all an essential part of our organization’s mission. We all really enjoy working with the farmworker community—it’s a highlight of the year for many One Community Health staff members!”

Volunteers interested in packing the remaining boxes can find out when that event will be held by visiting Columbia Gorge Food Bank’s Facebook page.

About One Community Health
One Community Health (OCH) is a nonprofit, Federally Qualified Health Center with locations in The Dalles and Hood River, Ore. Formerly known as La Clínica del Cariño Family Health Care Center, Inc., it was founded in 1986 and, today, has evolved into an official Patient-Centered Primary Care Home. OCH currently provides services to more than 12,000 patients. In addition, OCH excels in providing educational programs and support that reflect its integrated approach to health and wellbeing. Dedicated to advancing health and social justice for all its community members, OCH serves patients from the Mid-Columbia River Gorge Region: Wasco, Hood River, Klickitat and Skamania Counties

Follow us
2019-08-14
Previous Post: Lean Manufacturing… What It Is & How to Implement It
Next Post: Press Release: Thunder Island Brewing Co. to Break Ground on New Brewery & Restaurant in Cascade Locks, Oregon