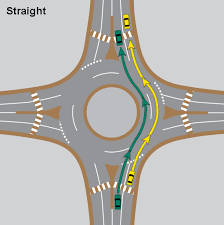 In a joint project between Skamania County and WSDOT it was decided a roundabout would be placed at the intersection of SR 14 and Wind River Highway. On May 28, 2019 the project was awarded to Crestline Construction Company, LLC. The construction project will start at the beginning of July and is expected to be completed by early fall 2019 according to Kimberly Pincheira, WSDOT Communications Manager.

The popularity of roundabouts has increased over recent years.

According to information on the project on the WSDOT website Hot Springs Avenue, the only other route into Carson, is threated by erosion from the Wind River and at some point in the future the road will need to be closed for the safety of the traveling public. Also the Wind River Road is poised to be the primary route for passenger vehicles and trucks, but the tight turns make the current configuration too difficult for commercial traffic.

The project is intended to keep people and freight moving between Carson and SR 14, with a roundabout offering one of the greatest safety benefits by reducing the potential for severe collisions. It should also minimize environmental and residential impacts in the area.

“In general, the public feedback we have received is supportive of the need for a project and the effort to maintain connectivity between SR 14 and the community of Carson. Response to the specific idea of a roundabout has been mixed, which is not unusual when a roundabout is being constructed toreplace intersections with traffic signals or stop signs that people tend to be more familiar with. Typically, support for roundabouts increases greatly once they are constructed and travelers have a chance to get used to driving them,” said Pincheira.

According to information found on the WSDOT website roundabouts move traffic along more efficiently than traffic signals and are considerably safer. Contrary to many peoples’ perceptions, roundabouts actually move traffic through an intersection more quickly, and with less congestion on approaching roads. Roundabouts promote a continuous flow of traffic. Unlike intersections with traffic signals, drivers don’t have to wait for a green light at a roundabout to get through the intersection. Traffic is not required to stop – only yield – so the intersection can handle more traffic in the same amount of time.

Additional information on this can be found on the roundabout page, which includes a section on public opinion: www.wsdot.wa.gov/Safety/roundabouts/opinion.