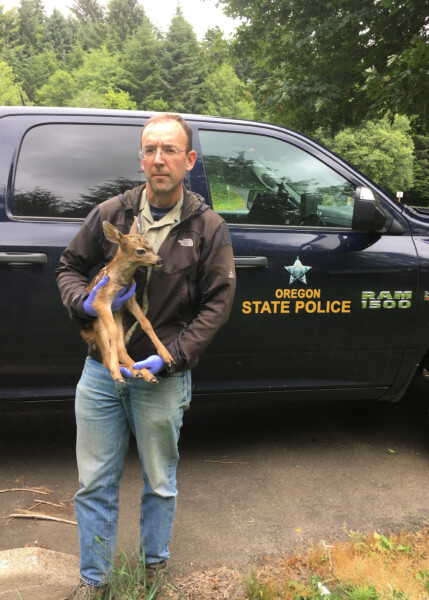 Put it back. That’s the advice you’re likely to hear if you bring a young wild animal home to “take care of it”—and you might get a warning or citation from Oregon State Police, too.

Oregon’s deer and elk give birth from May through July and many other wildlife species also bear their young at this time of year. It’s natural for mother animals to leave their young alone for extended periods of time while they go off to feed, so never assume a young animal is orphaned when you see it alone. The mother will return when it’s safe to do so—when people, pets or predators aren’t around.

Unfortunately, every year around this time, ODFW offices, licensed wildlife rehabilitators and even Oregon State Police are flooded with calls from people who picked up a deer fawn, elk calf, fledgling bird learning to fly, or other young animal they assumed was orphaned because it was alone.

Animals taken away from their natural environment miss the chance to learn important survival skills from their parents like where to feed, what to eat, how to behave as part of a group and how to escape from predators. Usually this leads to a shortened life span for the animal.

Removing or capturing an animal from the wild is a violation of state law (OAR 635-044-0440 “Wildlife may not be captured from the wild and/or held…”) Doing so is considered a Class A Misdemeanor and a court could impose a maximum fine of $6,250 fine and/or one year in jail. Last year, Oregon State Police issued several warnings and at least one No Wildlife Holding Permit citation to people who had picked up deer fawns, baby raccoons, coyote pups and other young animals and brought them home.

If you are certain a young animal is orphaned because you saw its mother die, or if you see an injured animal or one in distress, call one of Oregon’s licensed wildlife rehabilitators. Wildlife rehabilitators have the training and facilities to properly care for young wildlife and eventually return them to the wild. You can also call your nearest ODFW office during regular business hours, or Oregon State Police dispatch if an animal is in distress.

Follow these tips if you encounter young animals in the wild:

Deer, elk and other mammals:

Never assume an animal is orphaned. Don’t remove it from the forest, including your backyard. Female deer and elk and other mammals will often leave their young temporarily for safety reasons or to feed elsewhere. They will return when it is safe to do so (when people, dogs, or predators are not present).

Call your local ODFW office, Oregon State Police office, or a local licensed wildlife rehabilitation center when: 1) you see an animal that you know is orphaned because you observed the dead parent animal, or 2) the parent hasn’t returned for several hours or even up to a day, or 3) if the animal is clearly inured or in distress.

Bunnies are rarely orphaned; mother rabbits only visit den sites at dusk and dawn to feed their young.

Keep your dog or cat away from young wildlife, especially in the spring.
Young marine mammals are also rarely orphaned and it is common to see them alone on the beach in early spring and summer. Marine mammals in distress should be reported to OSP’s hotline at 1-800-452-7888.

Leave fledgling birds alone. It is natural for fledgling (mostly feathered) birds to be awkward while learning how to fly. If you see one on the ground, leave it alone and keep your distance. Bring your pets under control and indoors if possible. The mother bird will feed it for several days on the ground until it “gets its wings.

Return nestling birds to the nest. Nestlings (baby birds not fully feathered) found on the ground can be gently and quickly returned to the nest. If the nest is out of reach, place the bird on an elevated branch or fence, or in a nest made from a small box, out of the reach of children and pets. Leave the area so the parent birds can return.

Bring your pets indoors. Cats are a major cause of injury and death for all birds, killing millions of birds in the US annually. Keep your pets away from fledgling birds learning to fly.

Be careful when pruning trees as there may be a bird nest in the branch. Wait until birds are out of the nest.

Beware of cavity nesters. Barn owls and other birds could be nesting in hollowed-out trees or logs and in haystacks.

What if a bird flies into a window and appears hurt? Birds can be confused by reflective surfaces and mistakenly fly into windows. If you find a bird that has been stunned as a result of a window strike, put the bird in an uncovered box with a towel on the bottom. Keep it in a quiet place away from pets and check back in a couple of hours. If the bird has recovered, it will have flown off. If not, contact a local ODFW office or your local wildlife rehabilitator.

Let turtles cross the road. In May and June, females begin searching for suitable nesting grounds to lay their eggs. If you see a turtle on the ground, the best thing to do is leave it alone and let it continue on its path. It’s fine to move it off a road (if it is safe for you to do so,) but put it on the other side, where it was headed.