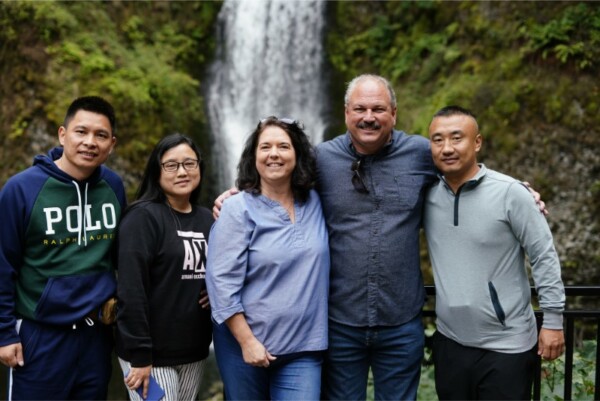 “We have company,” my husband Rick hollered to me down the hallway.
I stepped out of my office expecting to see our next-door neighbors, instead I was greeted by a young Chinese man standing in my kitchen. He wore a Ralph Lauren sweatshirt, smiled and nodded a greeting toward me.

“They’re picking our apples,” Rick said. I could tell he was happy about it because the trees were loaded, and we had been talking about giving some away.

I must admit, I was a bit curious about how in the world a Chinese man, Liu Hui (pronounced Ha-Whay), came to be picking apples in my back yard and was now standing in my kitchen. I smiled back at him and quickly realized he didn’t speak English.

The three of us made our way out to the back yard where his two other friends, Kammy Lai and Lushan Tang, were plucking apples from our trees and putting them in the Wal-Mart grocery sacks Rick had offered them just moments before.

Kammy, who spoke fluent English, explained that they had been driving along and came across a sign that said Columbia River Gorge National Scenic Area. They had planned on eating at Beacon Rock Golf Course but passed the turn and ended up on the road behind our house in North Bonneville, WA. When Kammy saw our bright red apples, she asked Lushan to stop the car. He didn’t want to stop, he wasn’t sure what kind of reception they might get, but she insisted. She explained to us they don’t have apple trees in the province where they live, so it was a real treat to see one so close to the road. She took a chance and picked one, this is when Rick noticed, and he decided to take them out some bags so they could take all they wanted.

“Where is the Columbia River Gorge National Scenic Area?” Kammy asked after we introduced ourselves.

“Well, you are kind of standing in it,” we replied. Then we started trying to explain the geography and sights to see in the Gorge.

Hui pulled a small digital translator out of his pocket and we quickly began communicating. Between Kammy, and Hui with his translator, we made all our introductions and began making small talk back and forth, Hui in his native tongue and us in ours.

We learned that Hui and Lushan manufacture fireworks in China, Kammy helps to market them. The town they live in manufactures 80% of the world’s fireworks. They had been at a fireworks convention in Branson, Missouri and decided to head west on a two-week journey to explore the U.S. and visit the National Parks. They plan on visiting all the National Parks in the United States in the next ten years. They had already stopped at Yellowstone and were heading to Crater Lake in the morning. It was early in the afternoon and we could tell they wanted to explore as much as possible while they are here, so we asked them what it was they wanted to see exactly…we made a couple of suggestions, and when we suggested seeing waterfalls, they all got excited.

I began to explain they would need to cross the Columbia River at the Bridge of the Gods, which was just a few miles from where we stood.
I stopped explaining and looked at Rick…”should we just show them?” I asked. Afterall, we love waterfalls, love exploring, and we were already enjoying visiting with our new friends.

Hui rode along with us and we took turns talking into his translator, learning about each other’s families, friends, home and culture. At one point on the trip he called his wife and children on a video chat and we got to meet them as well.

Our first stop was Horsetail Falls, which is located on Hwy. 30 in Oregon. We took pictures of the three of them, then asked new strangers if they’d mind taking a photo of all of us, they happily obliged.

Next, we drove to Multnomah Falls. They loved it. Smiling and laughing we once again asked a stranger to take our picture. After the picture we started talking to the stranger, Mark, who was enjoying some free time, after a Luis Palau conference in Portland, before heading home to Indiana the next day (add another new friend… lol!) I stayed behind as everyone else in the group, which now had grown by one Mark, made their way to the bridge that spanned the lower portion of Multnomah Falls. I took their picture from below as they all waved at me from the bridge. We asked Mark to join us as we continued our journey since he was also interested in exploring the Gorge.

Next up was Wahkeena Falls and then Crown Point State Park and Vista House.

They insisted on taking us to dinner as a thank you for showing them the Oregon waterfalls. They said they wanted to take us to the finest dining and best food in the area. Lori and I looked at each other and said, “Red Robin”? Although not exactly fine dining it definitely fit as an American experience, so we ended up at Red Robin in Gresham and before we knew it the dinner table was filled with our dinners and baskets upon baskets of ‘endless fries’, ‘bottomless root beer floats’, and even a ‘Mile-High Mud Pie’. Wow! I hope they don’t think we eat like this all the time.

We talked about how special it was that something as simple (or complex, depending on how you look at it) as an apple on a tree brought all of us together. It was one of the sweetest chance encounters I’d ever had. Kammy and I talked all through dinner, learning even more about each other and sealing our friendship that much more.

I know in the world today there is chaos, division, anger, hate, war, etc., etc., but there is also love, friendship, camaraderie, trust and a willingness to make the world a little brighter. Life isn’t about the chaos, it’s about dropping everything for an afternoon, so you can show new friends some beautiful, natural sights. It’s about that human interaction that comes down to more than just flesh and blood…Paulo Coelho wrote, “Really important meetings are planned by the souls long before the bodies see each other”. There is no doubt in my mind, our souls had had a meeting long before we met on that sunny September day in North Bonneville, Washington. Our paths could have easily just crossed briefly, but the day was meant for so much more. This was a life changing encounter that none of us will soon forget. It’s been a month and we recently heard from Kammy, now back in China, and she said every week when they meet, we are the ‘hot topic’. It is so interesting that we played such a big role in their visit to the U.S. when all we thought we were doing was being a friend and showing them the natural beauty of our home, the Gorge. We are all already looking forward to the next time we get to spend an afternoon with each other. Maybe next time they will take us to see waterfalls in China…to be continued for sure!!