Landmark Agreements to Conserve up to 2.3 Million Acres of Sage Grouse Habitat in Oregon 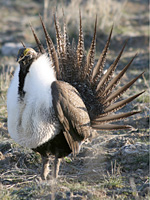 Secretary of the Interior Sally Jewell today joined Oregon Governor Kate Brown and U.S. Department of Agriculture (USDA) Deputy Under Secretary Ann Mills to celebrate landmark agreements that will allow landowners in all eight Eastern and Central Oregon counties with greater sage-grouse habitat to enroll their property in a voluntary conservation program – that could protect up to approximately 2.3 million acres. Landowners who participate receive assurances that they will not face additional regulatory requirements if the bird is protected under the Endangered Species Act.

“These voluntary agreements establish a collaborative partnership to ensure the conservation of the greater sage-grouse and sustain working western rangelands,” Jewell said. “The agreements in Oregon are more evidence that we can work together to provide regulatory certainty for ranchers and other westerners who rely on sagebrush habitat for their livelihoods, and also take important steps to protect the hundreds of species that rely on these landscapes.”

“These agreements are essential to the continued health of the sagebrush ecosystem and the livelihood of ranchers,” Brown said. “By working together, the state, local districts, ranchers and the Fish and Wildlife Service have devised a plan that advances both the principles of conservation and the local economy.”

“Over the past five years, USDA has worked closely with partners and landowners to restore more than 4.4 million acres of sage-grouse habitat across the West, demonstrating the real impact that voluntary, collaborative conservation on private lands can have on a landscape scale,” Mills said. “These voluntary practices have a proven track record, and today’s announcement will go a long way towards advancing our shared vision of healthy ranges and a healthy rural economy.”

Greater regulatory certainty can be provided in at least two ways, through Candidate Conservation Agreements with Assurances (CCAAs) and through agreements with USDA’s Natural Resources Conservation Service (NRCS) Sage Grouse Initiative (SGI). Under these types of agreements, landowners and permittees voluntarily agree to manage their lands to remove or reduce threats to species. Landowners, in return, receive predictability from the U.S. Fish and Wildlife Service that no additional conservation measures will be required or new restrictions imposed if the species becomes listed, so long as the agreements are being properly implemented. The goal of the programs is to encourage immediate benefits for a species while providing the landowner with the ability to plan for the future.

In Oregon, USDA has invested $18.4 million through SGI in on-the-ground restoration since 2010, helping more than 100 ranchers remove conifers from 200,000 acres of key nesting, brood-rearing and wintering habitats, addressing 68 percent of the conifer threat to Oregon’s sage-grouse population on priority private land. These efforts not only benefit the sage-grouse, but also improve the forage available on grazing lands.

Since the Harney County Soil and Water Conservation District entered into its CCAA with the Service in May 2014, it has enrolled over 53 landowners with more than 320,000 acres. Numerous ranchers are also ready to enroll under these new CCAAs.

Landowners and cattle producers who enroll will develop site-specific plans that address threats to sage-grouse and maintain or improve habitat. The major threats in Oregon are wildfire and a resulting increase of exotic grasses and juniper encroachment. All participating enrollees will agree to maintain contiguous habitat and avoid further fragmentation. Other activities that may be included in the plans are juniper removal, invasive grass and weed control, and marking fences known to be a collision hazard for sage-grouse.

Today’s announcement builds upon partnerships across the West to conserve sage-grouse habitat. In addition to the more than 1,100 ranchers partnering with USDA to deliver sustainable ranching measures on over 4.4 million acres through SGI, several innovative conservation agreements with landowners are focusing on providing net conservation gain while offset unavoidable impacts. Just yesterday, the Interior Department announced an agreement with Barrick Gold of North America and The Nature Conservancy to provide credit for greater sage-grouse habitat improvements in Nevada while continuing to support gold mining in the state. In Wyoming last week, the Interior Department joined Governor Matt Mead to announce the launch of the nation’s first conservation bank for greater sage-grouse.

Greater sage-grouse once occupied more than 290 million acres of sagebrush in the West, but the bird, known for its flamboyant mating ritual at sites called leks, has lost more than half of its habitat due to growing threats from rangeland fire, invasive species and development.

The deteriorating health of western sagebrush landscapes has sparked an unprecedented and proactive partnership across eleven states to conserve the uniquely American habitat that supports iconic wildlife, outdoor recreation, ranching and other traditional land uses.

More information on the greater sage-grouse and the ongoing, collaborative work to conserve the sagebrush landscape is available at: http://www.fws.gov/greatersagegrouse/.