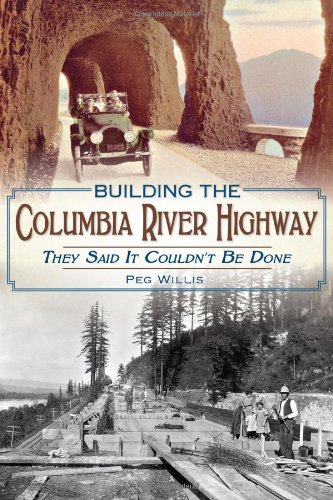 The Columbia River, the major waterway in the West, is 1,243 miles long, the repository of waters draining from land area the size of France, consisting of seven states and Canada. The gorge through which it runs was likely created many centuries earlier by a massive flood from a melting glacier originating in Western Montana. This flood occurred many times, digging the gorge deeper each time, creating a path to the Pacific Ocean.

The original highway was the river itself. Native Americans traveled up and down the river by canoe, while at the same time producing paths alongside. Early settlers used both these paths and the river to get to the Willamette Valley. Getting a covered wagon down these paths was impossible, so they constructed a “highway” around the south side of Mount Hood.

The first road, a portion only, was carved out in the 1870s. A complete highway was thought to be impossible to build. Ten years later, a railroad running from Cascade Locks to Portland was built.

The author introduces us to Sam Hill, a Harvard-trained lawyer who worked for a number of companies over his lifetime. His travels to the West got him interested in the Good Roads movement, particularly in Washington State. In 1907, he built a home high above the river and named it Maryhill, and it still sits there proudly today.

Another Sam, Samuel Lancaster, had overcome polio to become an outstanding engineer, who was also interested in the Good Roads movement. He gained a national reputation for his work and Sam Hill invited him to Washington to work for him.

Ms. Willis introduces us to a host of individuals who had become the movers and shakers of their professions, some names still well known today in Washington and Oregon: Meier, Wemme, Bowlby and Yeon. These men were interested in transportation, logging and building roads. The teen years of the 20th Century saw these men coming together and excavating the land along the river and up the hills, building a highway of short segments at a time.

Much of the work was experimental – building machines to construct the roads, creating a dam and construction materials. The road seemed to be built by and for the rich, but as Henry Ford began mass producing his cars and the public began buying them, they wanted roads on which to drive their new tin lizzies.

This new highway had to be chiseled out of the rock, bridges had to be built over the ravines, waterfalls had to be skirted, and coping with the weather was necessary – and all of this with the rudimentary machines of the time. Today, racing down the four-lane highway, it is hard to imagine the ingenuity it took to build this highway along the river.

Peg Willis has given us a treasure, a book filled with detail and photos, one to be read over and over. She has made history come alive with her excellent writing. Highly recommended.