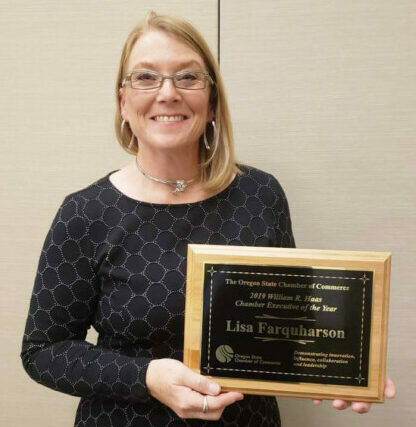 According to the OSCC to be considered for the award, candidates must be nominated by their board and must have held a CEO/Executive Director position for at least 5 years. Criteria for this honor is based on personal character, management excellence, community relations and leadership. The nomination packets meeting these requirements are then sent to a selection committee made up of previous OSCC Executives of the Year.
Debi Mollahan, the CEO of the Tigard Chamber of Commerce, said at the conference while announcing the award, “Farquharson has served her community as executive director of the chamber for seven years. When she took on the position membership had been declining and businesses were leaving the chamber because they did not view it as a good return on investment. Businesses and partners reiterated again and again her dedication to the betterment of the community,” said Mollahan. “To quote one of them, ‘she has turned our chamber around, we are seeing growth in membership and she has transformed our chamber into a well-run, respected, service-oriented resource.’”

September 2012 Farquharson was living in Pendleton and working as the membership director for the Pendleton Chamber of Commerce when she came across the listing for the Executive Director job opening in The Dalles. She called her husband Jon and asked what he thought she should do. “That’s your hometown…you need to apply…it’s your time to fly” he told her.

By the end of October she was making her way to the Oregon State Chamber of Commerce Convention, which was being held in Vancouver in conjunction with the Washington State Chamber of Commerce. She stopped by The Dalles and picked up two of her new employees, and they all made their way to the convention. She knew, after spending a couple days at the convention, her new job was going to challenge her like she’d never been challenged before. November 1, 2012 Lisa walked into The Dalles Area Chamber of Commerce, took the helm of the organization and has continued to move the chamber and her community forward with a positive attitude, an amazing work ethic, and a vision of collaboration and comradery.

“I had no idea Lisa was receiving an award,” said Katie McClintock, Lisa’s executive administrative assistant. “The Board of Directors and her family did a good job at keeping it secret. Until about 15 minutes before she received her award when someone let it slip… And then of course I had to keep calm and maintain composure. There is never a day where she doesn’t give it her all and it never slows her down. From the day she started at the Chamber there has been nothing but growth and stability and her dedication shows that she is willing to go the extra mile to make sure that our members are successful. Sometimes the Chamber can be a thankless job (although that is never her words) so I’m very happy that she received the award and on such a big scale. I mean out of over 100 Chamber Executives in Oregon Lisa won! That’s something to brag about!”

The job did not come without its challenges.
“The biggest challenged I face when I started was the budget. I had two weeks to get a budget to the Chamber Board of Directors. I printed every Quickbooks report I could think of, sat in the middle of my floor with them all spread out before me and created the budget. I’ll never forget that first week.”

“My board is all back there,” said Farquharson in her acceptance speech, “and my family and I couldn’t have done it without them and all I can say is persevere, don’t give up, and with your members take on a whole personification of mama bear. You are there to protect them and if you hate politics, think about how you are the only person that can be the voice for them. That’s my drive. I want to take care of my community and make it successful, so roll up your sleeves, take a deep breath, find a mentor amongst us, there’s someone here who has gone through what you are going through I guarantee it. Find them, latch onto them, and don’t stop.”
Over the past seven years Farquharson has implemented many positive changes at the Chamber.

“We changed the inside,” said Farquharson. “We created a lobby, branded the building with our colors, put in a cubicle and we changed our bookkeeping system. We changed the way we collect dues by implementing a tier system that lets our members choose the package that most suits them, we added Coffee Connection, a morning networking event and we changed Cherry Fest from just one day on Fourth Street to three days downtown.”

The chamber office was built in 1936 and has remained the chamber office since it was built. In 2017 they completed a $90,000 façade project, which would have cost $100,000 had Farquharson decided not to act as general manager over the project. She did quickly learn that she is cut out to be a chamber director and has no desire to go into the construction trade anytime in the near future.

When she’s not advocating, promoting or supporting the people who own local businesses, or helping her team to do the same, she is likely out on the water…you know the one, the Columbia River, which is in constant motion not far from where her desk sits.

“I like to do anything on the water,” said Farquharson. “I like to fish if I catch the biggest fish.” Her and her husband Jon are avid fishermen. “The biggest fish I caught was a 29-pound Salmon on the Columbia at the mouth of the Klickitat. There is just nothing like fishing the Columbia in the Fall in the Gorge.”

During my interview, she received a phone call, I could tell she was excited about the news she was getting on the other end of the line.
“We’re open for Coho,” she said enthusiastically as soon as she had hung up the phone. A fisherwoman at heart for sure. #fishpink #fishlikeagirl
She also enjoys scrapbooking, is a card maker and most recently has taken up wine tasting, however her two greatest loves are her husband Jon and her son, Quinn.

“None of this would have happened without the support of my board members, my staff, my family and my rock-star husband,” said Farquharson, who over the years has learned how to be a good supervisor, use proper HR, has gained confidence and thrived in leadership. “I have three requirements of my staff. One, get to work on time; Two, do your best; Three, communicate. Supervisors have to learn their staff’s language, we have weekly check-ins and I ask them, ‘is there a road block? How can you do your job to the best of your ability and how can I help you get there? I try to show my staff value in different ways, one thing we do is the chamber will pay for one class per term and give staff members paid time off to attend the class.”

Her role in the community isn’t always easy she admitted, “I heard this quote this week… ‘do it….afraid’, sometimes, that is what we have to do,” said Farquharson. “I mentally have a dinosaur suit, and put it on when I need thick skin.” But she wouldn’t trade it, “I have an amazing community to promote. I have a passion for people and for business. We are here to take a stand on legislation if needed and advocacy is our number one priority. I want to be that voice for our members, and unify all the voices in our community so we can have a stronger message. We are the first stop for information for businesses, tourism, resources and information. We can help get people connected to the right spots.

In her acceptance speech Farquharson recognized her mentor Silverton Chamber of Commerce Executive Director Stacy Palmer.
“My mentor is not here tonight, Stacy Palmer, I understand she is not feeling good, but I couldn’t have done some of the things that we did without her. She gave good council and advice, so find one of those if you are brand new in this room. And to the rest of you thank you. And to this team back here right now, thank you so much,” Lisa said in her speech.
Palmer had plenty to say about her friend as well. “Lisa is an amazing Chamber Leader that has grown tremendously over the last 6 years I’ve known her. Lisa and I met and really got to know each other as we bonded over dealing with difficult issues in our work place. I’d had a public official that was very critical of our chamber, yet I had to work with them for several years. Lisa reached out when she had struggles of her own, to seek guidance on how to work in tough situations with the grace and compassion necessary in small towns. Lisa’s drive and determination to do what’s right for her community is evident in everything she does – I’m proud to call her a peer – but even luckier to call her a friend. In the years I’ve know Lisa – she’s shown herself to be dynamic, compassionate, and very driven. I’m impressed with her tenacious desire to make her community the best it can be and to be as welcoming to the business community as it can be.”

Oregon has 110 Chambers of Commerce, 82 have paid staff and 28 are run by volunteers.

“Each community is different,” said Palmer, “you have to do what works in your community, that means knowing your community, its needs, its wants and who can help you further your mission. If you associate with people that have the vision of what chambers can do for a community – then you can do anything.”