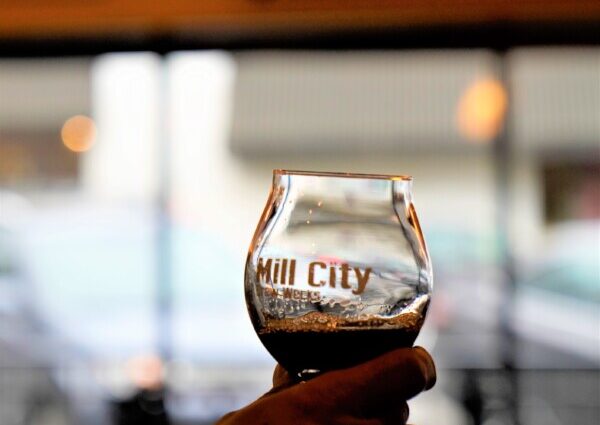 At Mill City Brew Werks in downtown Camas, it is not all about the beer, but it is a good place to start. When owner, Mark Zech, along with a co-worker, first began brewing, they were doing it straight out of Zech’s garage.

“I told everyone ‘if the garage door was open, we were open’, I quickly had a lot of friends,” Zech laughed. He couldn’t legally sell the beer, so the best thing to do was experiment, give it away and see which flavors were the most popular. There was never a shortage of taste testers when the beer was flowing.

Zech had three fermenters in his garage and continued his operation there for close to three years.

Zech and his wife, Fran, had arrived in Camas in 2005 after being transferred there through his work with a simulated aircraft company based in Anchorage, Alaska.

Space in his garage was limited, so Zech began searching for a building where he could expand his operation and begin selling his beer to customers instead of giving it away for free.

“We looked everywhere for space to rent,” said Zech.

“We saw this building and knew it wasn’t big enough, but someone said there was a basement.” He asked his realtor if he could look at it, but the realtor assured him the owner would not rent that portion of the building out. Zech wanted to see it anyway and once he did, he knew it would be the perfect place to create a brewery.

“Camas needs you here, she told me,” said Zech.

Mill City Brew Werks operates on a 15-barrel system, created by Glacier Tanks, and they brew in 12 barrel batches. They have four fermenters and four bright tanks.

Zech brews his beer keeping with family tradition by using grain from Europe and his family’s yeast he has brought over from Ausburg, Germany.

Beer in the Pacific Northwest is almost as popular as water, so to find just the right touch to make a beer unique requires some ingenuity, creativity and a whole lot of passion. When Zech decided to become a brewer, he knew he wanted to honor the beer makers in his family that came before him, so he keeps them in mind with every recipe he creates.

“My son Brett is the head brewer now,” he said. “Making beer is a science and it’s an art and quality ingredients. If you put all that together with the passion and a love to do it, you’ve created a perfect product.”

Until he began distributing to Seabrook Resort in Washington, Zech distributed his wares in three states. Seabrook completely changed the game. Between Camas and Seabrook they consume everything the brewery currently creates.

They expanded two years ago and opened a cocktail lounge which is open daily and is available for 21 and over parties. Every table and each seat at the bar have USB’s and 110 outlets for all your electronic charging needs.

So that’s the beer side of the business, but there’s so much more to Mill City Brew Werks…let’s talk pretzels, and not just any run of the mill pretzel, these Bavarian Pretzels Sticks, created by Fran, are uniquely delicious. They are crispy on the outside, soft and warm on the inside and served with a house-made beer cheese.

There are plenty of other appetizers to choose from if you aren’t in the mood for pretzels. House-made Kettle Chips, Cheese Curds, Pork Cracklins and Calamari are a few of the items available from the appetizer menu.

They currently employ 17 people and make everything they serve fresh from recipes created and perfected by Fran in her basement bakery.

When Mark was asked about his favorite item on the menu it definitely sounded like it was no contest.

“The Ahi Smoked Tuna Melt. It is so so good, so good!”

Read more about this sandwich in Rick’s Restaurant Review.

Other sandwiches included the Chicken Caprese Panini, Triple Grilled Cheese and others. Burgers are also a big hit at Mill City Brew Werks where the Smoked Blue Onion Bacon Burger and the Mt. Hood Burger are two favorites. For entrees try the Chicken Alfredo Florentine, Smoked Wild Hog Wings or Santa Fe Mac. Your taste buds are going to be so glad you stopped in.

In addition to awards for their beer, in 2014 they also won the Excellence on Main Award for Economic Vitality from the Washington State Main Street Association.

“When you own a business its seven days a week…if you’re awake you’re working,” said Zech, all the while conveying he wouldn’t have it any other way. “My pay is seeing somebody totally happy with exactly what they got, their food and their beer, the little ones with their hands and face pressed against the glass watching us brew beer, that’s my pay.”