Pink in the Gorge Raises Money for Pink Sistas 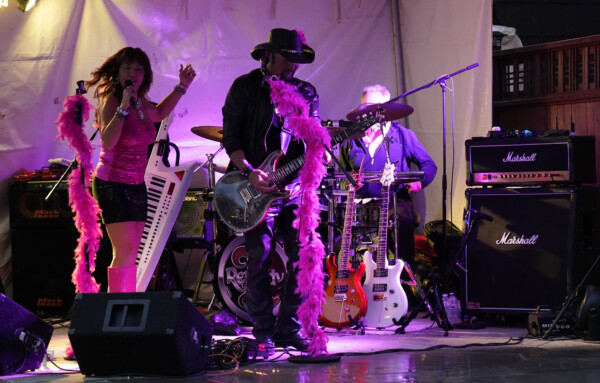 Grief changes people. It tears at your heartstrings, rips at your soul, and takes over your entire body as if to drown you in sorrow…forever….but!!!!

…..somehow, someway, eventually it usually loosens its grip enough that the person consumed by grief, can take that first breath of healing and that person changes once again, often ready to tackle their world in an entirely new way; less whole than before, but whole enough to try life again; never leaving behind the grief, yet learning to live life a new way within grief’s thick walls.

Such was the case with Deb Hart. She was born and raised in Stevenson, Washington, which is where she also raised her children. The loss of her son, Kasey in August of 2006, rocked her world like never before. Not knowing the cause of his death made the loss that much more unbearable. Never knowing why he was taken at such a young age, fresh into a new promising career, with a whole life in front of him, can cause a mom to question everything there is to question about life and why one stays on earth while another is swept away before the next breath can be breathed.

Grief took hold of Deb and took a toll on not only her mind, but also on her body. She was diagnosed with breast cancer just seven months after the loss of Kasey. She found herself fighting for her life at the same time she was trying to navigate the many channels of the quagmires of grief.

“I called it my year from hell,” she said. “Everybody has one; for some it’s a diagnosis, others it’s a divorce, others the loss of someone they are close to.”

Deb’s ‘year from hell’ didn’t miraculously end at the end of twelve months, but eventually her health returned and she knew she had to turn the devastation of losing her son into something positive. “It took me four years to get out of the worst funk ever. I was bitter and I was angry, and then I got to a point where it could not be about me anymore.” So in 2011 she started Pink Sistas and for four years retreats took place at Pine Hollow Reservoir in Wamic, Oregon. They now take place at Deb’s floating home at Big Eddie Marina along the Columbia River in Portland.

Pink Sistas’ mission is to provide women that have had a diagnosis of breast cancer, a weekend to be whole while attending a Columbia River Thriver Retreat at no cost to them.

During the weekend retreat women learn to kayak, to stand-up paddle board, and the art of jewelry making. They get to spend time meditating and enjoy the sunshine and the water as they practice yoga on the dock surrounded by the Columbia River. Of course a peaceful ride on the Pink Sistas’ Party Barge (Donated by Jan Weston of Weston Kia) is a must at each and every retreat.

“The water is healing,” said Deb.

The Fred Meyer Corporation is sending 21 women to the retreats this year and has donated all the swag bags for each guest for the entire season.

The yearly retreat season starts the first week in May and ends the 14th of September. This year they will also add a winter retreat at Government Camp in November.

“This is an uncharted journey for each of them and it is so personal,” said Deb. “My whole focus is to help them relax. I’ve been asked as they leave after the weekend, ‘who’s going to make my coffee tomorrow?’.

Through all of this I think the most rewarding thing is just giving back and learning the art of giving and not receiving. I feel, with what I have personally been through, I have been equipped to help women go through their worst, and at the retreat they can leave cancer on the bank and come have fun with Deb.”

The non-profits yearly budget is $20,000 and no one in the organization is paid, it is truly a labor of love.

“It’s ten weekends, each with ten beds, ten sheets, ten towels, and ten beach towels and there is nothing else I love doing more than this.”

The main fund raising event, Pink in the Gorge takes place at Caswell Sculpture Garden in Troutdale, Oregon on May 18th. It includes food, beer, wine, cider along with both a live and silent auction. All proceeds of the event go to support Pink Sistas’ ten retreats.

“I’ve become a volunteer extraordinaire and a fund raising queen,” she says with a laugh.

On June 22 there will be a Bikers for Boobies poker run – it starts out in Clackamas at Latus Motors. Harley Davidson riders pay $20 to ride and their passenger pays $10 to ride. It is open to the public and the riders stop at different locations along the Run. They will end at Ilani Casino around 5-5:30 pm. Pink Sistas pink tent will be set up and giving out prizes. All the bikers and the public that wanted to participate will have dinner at Ilani, maybe gamble a bit, and then attend Party with a Purpose featuring the band Remedy.

September 7th will be the Pink in the Gorge Golf Tournament at Skamania Lodge in Stevenson, Washington.

Each event helps to ensure the Pink Sistas will be able to continue making such a huge difference in the lives of women who have been affected by the diagnosis of breast cancer. These survivors, who become part of the Pink Sistas’ family, learn valuable life lessons, find life-long friendships, find comradery, find peace and have a weekend tailor-made for them, jam-packed with good food, great memories and of course, plenty of love and laughter.